Flavors are available in a wide variety of formats and two of the most common types for baking are “the extract” and “the emulsion”.   Both deliver on flavor, but let’s explore the differences in more detail.  At a rudimentary level extracts and emulsions have one thing in common: aroma and flavor.  The concentrated flavor essences and aromatics may be of natural or artificial origin, but the primary difference is the type of base the flavor is diluted in and how the flavor is kept in solution.

Extracts are the most common type – found in grocery stores everywhere.   Some flavors, like vanilla, are made by percolating chopped vanilla beans with an alcohol solvent.   Alcohol is a common base for blending essences as most flavors are easily soluble in alcohol.  The alcohol used is generally tasteless, but it can have a distinct alcoholic smell.   When shipping extracts, caution is required as most are considered hazardous due to their lower flash points and flammability. One benefit of extracts is that they generally contain enough alcohol to prevent spoilage from microorganisms or bacterial growth. 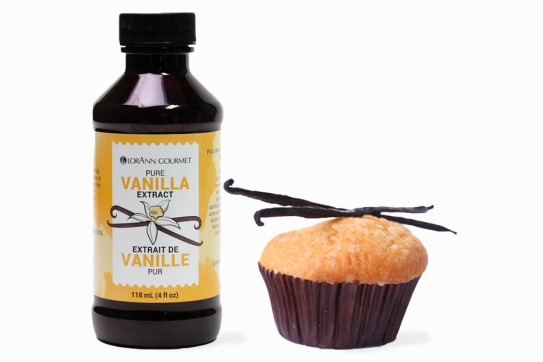 Vanilla extract is the only flavor of extract that is regulated in the United States by the Food and Drug Administration (FDA). According to the FDA, any product labeled as “pure” vanilla extract and sold in the U.S. must contain at least 13.35 ounces of vanilla beans per gallon during extraction and be in a solution of at least 35% alcohol.  Other extract flavors such as almond, lemon, orange, etc. are typically in a base of mostly alcohol and water, but the specific contents and ratios are not standardized and can vary widely by manufacturer.

An emulsion avoids the use of solvents, such as alcohol, to blend the flavors into a liquid solution.  Instead, a flavor emulsion is a microscopic dispersion of tiny flavor droplets in an aqueous medium, usually water. This is made possible by the use of an emulsifying agent, commonly a natural vegetable gum such as Xanthan or Acacia. Emulsions are made through a high-shearing process where drops of flavor are mixed with an emulsifier; shearing is the process of making tiny droplets.  The flavor droplets become encapsulated by the gum.   These natural gums also help protect the flavor from thermal abuse during the heating or baking of a product.

Emulsions tend to be thicker than extracts and are often cloudy or opaque.  For this reason, extracts are generally preferred in clear beverages.    Other advantages of emulsions include lower cost and more natural aroma.    Most importantly, emulsions tend to be more resistant to heat resulting in less volatility of the flavor; in other words, the flavor won’t “bake-out”.

When using LorAnn Bakery Emulsions as a substitute for extracts, the ratio is 1 to 1 for most recipes. 1 teaspoon bakery emulsion = 1 teaspoon extract.

Check out our recipes online to get ideas of how to use an emulsion. This recipe for
Almond Bars is one of our favorites.